*Exchange at the time of writing

I have to admit I had my apprehensions about going to Ukraine but I couldn’t have been more wrong. Ryanair launched a new route to Kyiv (the actual correct way to spell Kiev when translated from Ukranian) from Manchester starting in April 2019 so I was one of the first people to use this route. I also thought that by this time the dreaded B word would have happened so Ukraine not being in the EU wouldn’t have affected my travel plans.

My initial fears were that I couldn’t read Cyrillic and that there would be limited English speakers. I do actively make an effort to learn some phrases before I go anywhere but it can only get me so far. Plus my options from the airport were slightly limited as it is about 20 miles away from the city itself. Both the bus and train went to the main train station which isn’t in the centre and was about 3km away from where I was staying but were cheaper options. With no EU data roaming, I’d have to use my phone’s GPS or even dare I say…a map. You don’t realise how much we rely on phones and technology (and free data roaming) until you don’t have access to it. I ended up booking a taxi through Booking.com for £16.99 each way, which for a 20-mile journey isn’t too bad. Driving to the city across a bridge that still had hammer and sickle columns each end and stars on the railings gave me a Gilead/ Hunger Games district vibe that excited me but also was a bit daunting.

I stayed right near Independence Square which is the main and central square and location that was the centre of the 2014 revolution in Ukraine that is documented on the square and a memorial to the fatalities of the events that occurred there is being created. I did a Soviet tour in the afternoon which highlighted the obvious recent history and architecture still prevalent in Kiev, more so than any other of the former Soviet countries that I’ve visited.

Following the revolution, the currency in Ukraine – the Hryvnia became a lot more volatile which is good for us when exchanging but not so good for locals. It’s difficult to buy outside of Ukraine but exchanging is really simple. Any bank, post office or exchange office will accept Euros, Dollars or Roubles and I got a rate of 30 Hyrvanias to 1 Euro. It’s seriously cheap that it’s hard to get your head around how little you’re paying for things.

My first morning was an earlyish start to get pics (do it for the gram as always) followed by another walking tour of ‘ancient’ Kiev. Primarily, Kiev’s many churches that are often adorned with gold domes as well as the street art scene and many statues.

Although Kiev is a walkable city, it’s quite expansive and I ended up walking 14 miles in one day since the weather was nice. Even so, I was wearing skinny jeans and chafed off the hair on the inside of my legs. The metro, which I didn’t use but passed a few stations is extremely cheap (1 Hryvnia per journey) and tokens are used rather than tickets.

I walked from one side of the city from the Chernobyl Museum (which I wasn’t overly thrilled about but cost less than €1 to enter) to Pechersk Larva. Often referred to as the Monastery of the Kiev Caves, Kiev’s Pechersk Larva is an Orthodox Christian monastery complex that is an important centre of Orthodox Christianity. There are a number of churches and museums but you can just pay to see the outside and access to the caves in which monks once lived and worshipped – some of which are mummified resting in the caves. There are no lights at all so buy a candle before you enter for a couple of Hryvnias. The passages are very tight and it’s often filled with worshippers. I was more concerned about my 100% polyester jacket going up in flames with me still wearing it in this confined space. 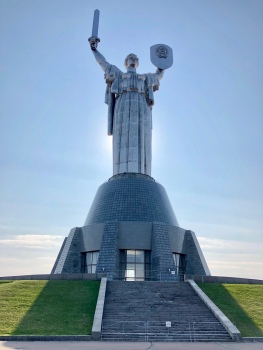 Nearby and you can’t really miss it since it stands at 62 metres tall above the city is the Motherland monument. Located at the National Museum of the History of Ukraine in the Second World War Memorial Complex (a bit of a mouthful), which contains a museum, the monument and very Soviet-style memorial. I didn’t go into the museum itself but it is one of the largest in Ukraine and 30 Hryvanias (€1) to enter.

No trip to Kiev would be complete without going to Chernobyl – the location of the worst nuclear disaster in history. I’d pre-booked a trip through chernobyl-tour.com and paid a 25% deposit, then pay the rest on the day in person. It was quite pricey – about €80 however the tour lasted 12 hours and was highly reviewed on TripAdvisor so I definitely felt like I got my money’s worth. 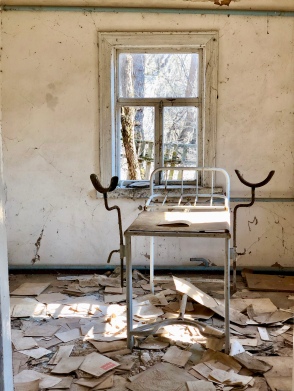 The journey up to the 30km exclusion zone takes about 1.5 hours and after several checks, the first stop was the village of Zalissya with buildings such as the hospital and shop still accessible. It’s hard to comprehend as it doesn’t seem real but everything is in such a state of disrepair and weathered that it’s obvious how long things have been in this state.

Following on from this, the next stop was the almost fully buried village of Kopachi with a remaining nursery that many pictures of dolls and toys people recognise. Some of the things must have been placed but things like children’s shoes are covered in dust and books still on shelves that haven’t been touched for years. 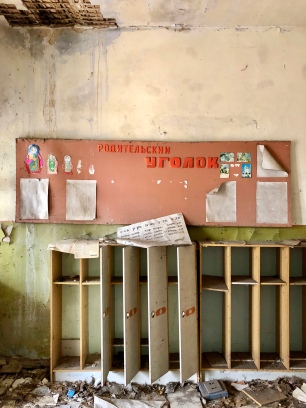 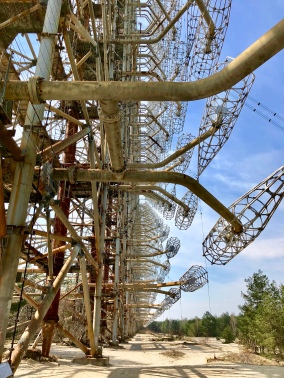 Something I’d not heard of (ironic as it was intended to be a secret) was a stop we made at the Soviet-built Duga Radar which is 700m long and over 100m tall. It was intended to pick up signals of incoming missiles during the cold war but it interfered with radio waves and channels with a tapping noise so was given the nickname ‘Russian Woodpecker’.

The final two stops was close by to the reactor itself. Now under the ‘New Safe Confinement’, the levels of radiation close by to the reactor are quite low and we probably got within 100 metres of the arch. The levels of radiation exposure to on the tour are very low as you’re only in certain areas for a limited amount of time and the majority of the radiation is now in hotspots or in the ground.

Finally, the last stop is the famous city of Pripyat. Contrary to the naming of the power plant, Pripyat is the closest settlement as Chernobyl is quite a distance from the reactor site. The once model Soviet city used to be home to over 50,000 people and is now deserted. It’s not scary as you know there is literally nobody there but literally, everything has been left as it was. You can’t enter any of the buildings in Pripyat but you are allowed to look through windows or doors. Shopping trolleys still in the supermarket, school desks still with equipment on and writing on the boards, plus the famous amusement park. 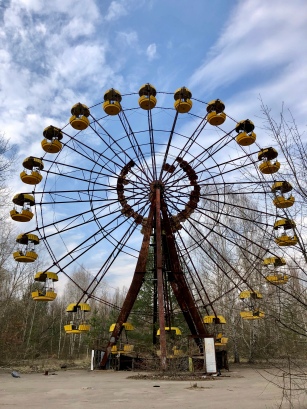 Overall I thoroughly enjoyed my experience in Ukraine. All of my preconceptions were blown away instantly and it’s definitely worth a visit. Probably the cheapest place I’ve been to so far, lovely people, interesting history and I know at least 2 other people going soon so obviously picking up speed as a tourist destination